The 2019 farmer and rancher of the year

The Colorado Association of Conservation Districts proudly recognized its 2019 Farmer and 2019
Rancher of the year award recipients at this year’s National Western Stock Show on January 22, 2020. 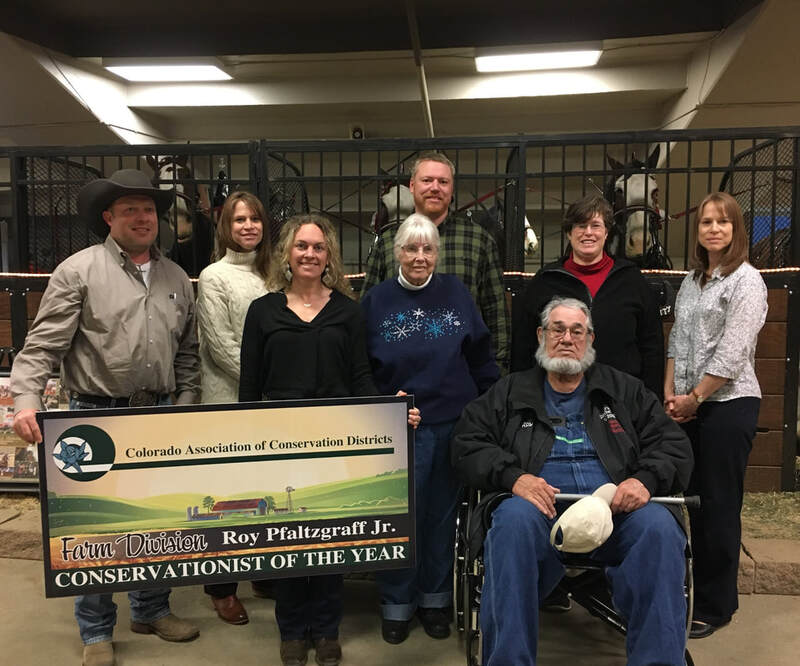 Roy Pfaltzgraff Jr. and his family operate their family farm in Northeast Colorado, south of
Haxtun. Roy’s farming operation was chosen by Haxtun CD in recognition of important and
tangible conservation practices that have been implemented across his farm.

Roy has been involved with soil and water conservation and innovation since his youth. His
father, a medical missionary in Nigeria, was always trying new agricultural methods and seeds.
In 1967 Roy returned to Nigeria to work at the hospital with his father, involved with
administration and physical/occupational therapy. This included working with Nigerian farmers
and adapting various crops and farming techniques.

In 1973 Roy and his family returned to the family farm in Colorado where he farmed with his
father-in-law. Roy started to try new things: sunflowers in 1975 and no-till in 1983 with corn
and milo. The farm has 2080 dryland acres.

In 1999 the farm converted to completely no-till and Roy's son, Roy III, joined the family
operation. By then, every field was being soil sampled and fertilizers were applied as needed.
Complete farm records were computerized so individual fields and crops could be analyzed. To
further their education in no-tilling, the Pfaltzgraffs continued to attend no-till and soil health
conferences. Other conservation practices done on the farm are planting living snow fences and
windbreaks. 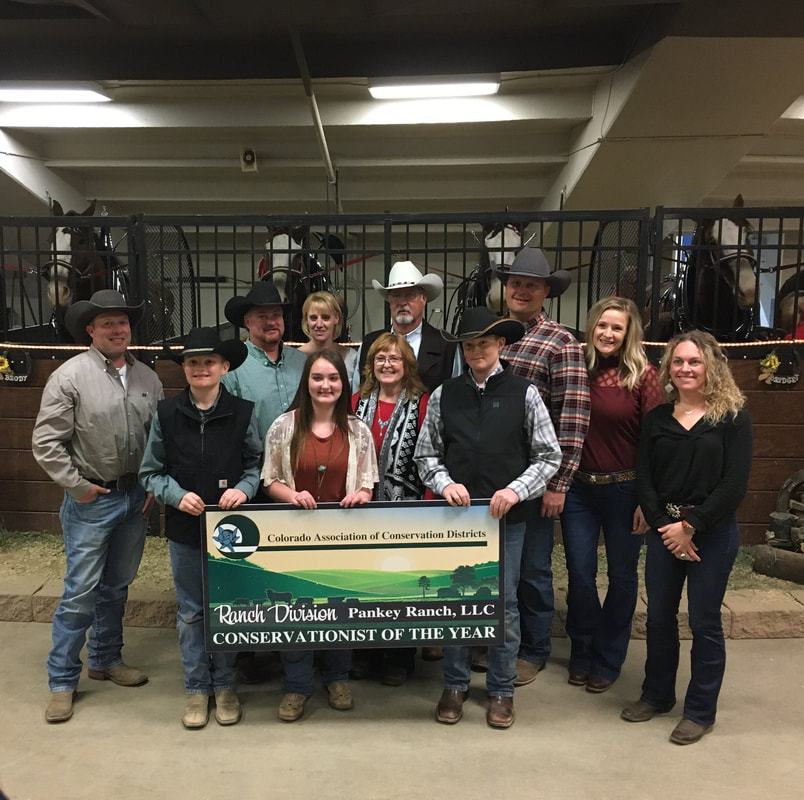 The Pankey Ranch owned by Keith and Shelley Pankey is approximately 30 miles Northwest of Craig. The
ranch was homesteaded over 100 years ago. Keith and Shelley have two sons, Kevin and Justin, which
take pride along with their family in assisting them with day-to-day activities on the ranch.

The Pankeys became the owners and managers of the operation during the early 1990's. They
implemented a plan in multiple stages that initially started with the family making financial investments
into the property to develop more water through the change over from windmills to solar pumps and the
addition of storage tanks, pipelines, and troughs.

Later this was incorporated with assistance from the
Natural Resources Conservation Service, BLM, USFW, and CPW.

Currently, the livestock numbers hold steady. Each pasture is deferred until desirable grass species have
established themselves. Their rotation and stocking rate are based off range condition, animal
performance, and precipitation. Water developments have greatly increased the grazable acres.

Due to the family's appreciation for the land and conservation minded actions, the Pankey Ranch will
continue to prosper in the future as a wildlife and ranching operation.
This spirit of conservation management earned them the title of the CACD’s 2019
“Conservationist of the Year” in the Ranching Division!
​***